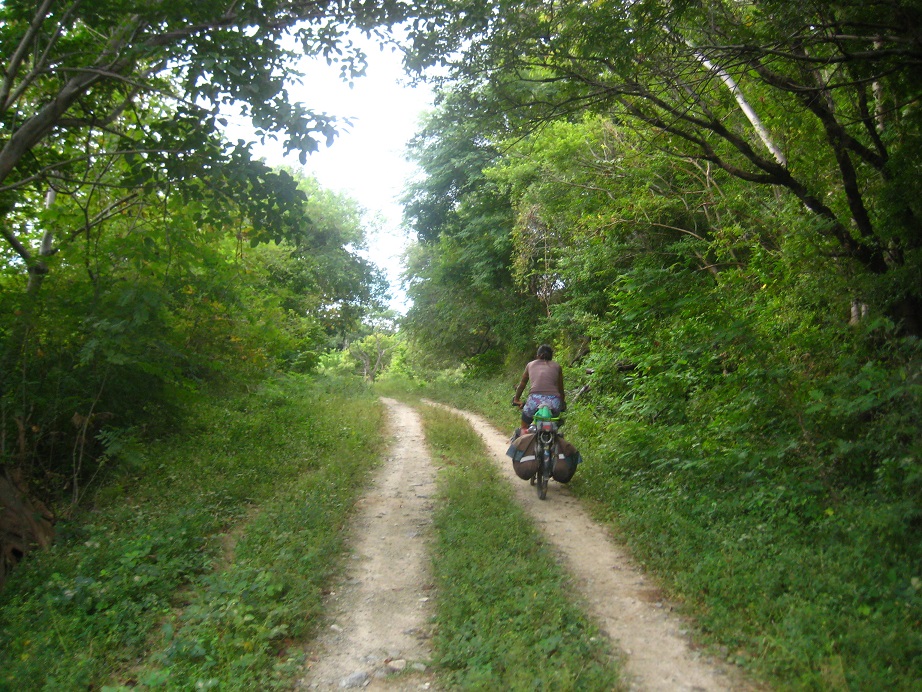 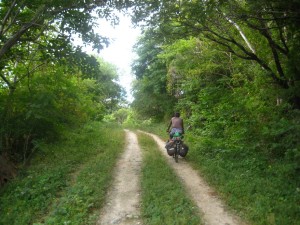 As you have read in previous posts, we’ve had many special encounters riding our bicycles throughout the world.  We’ve also had a lot of fun writing about them for you.  The stories we write are an attempt to broaden our writing skills while seeking out the style that will evolve into our own.  For this entry we’ve decided to write in the style used by the ancient Greek philosopher, Plato.  It is a dialogue between the culturequest team (Peter and Shahla – us).  It takes place shortly after crossing into the USA from Mexico.

Shahla: “Wow, I can’t believe we made it through the entire length of Latin America.  What a wild ride.  I’m going to miss more than a few things about it.”

Peter: “Yeah, we were in Latin America for two years and I have to say, I was feeling really comfortable there.  It was a good routine we had for getting stuff done in towns: just hit the central plaza and then find everything from there.  We can thank the Spanish colonial culture for that.”

Shahla: “All in all I think the cultures throughout Latin America were quite similar.  The real differences were noticeable when we travelled through lands occupied by indigenous peoples.”

Peter: “Or waters.  Remember the San Blas islands off the south Caribbean coast of Panama?  That’s the first culture we encountered in Central America.  Actually, now that we brought it up, I remember having mixed feelings about the culture in that area.  I know we both believe that there’s beauty in cultural diversity.  People should help the indigenous to keep their cultures alive but there’s an overlap of modern consumerism and old-world community structure in the Kuna Yala that doesn’t seem healthy.”

Shahla: “I think I know what you’re getting at.  While we were on that cargo boat and stopping at the small inhabited islands I was excited and happy to see people living such traditional lives, close to nature and seemingly happy.  Then I noticed that the people were also eating processed food that came to them packaged in plastic and they were using all sorts of disposable products that aren’t biodegradable.  The leftover waste from those products was disposed of by the Kuna people the same way they would dispose of a coconut husk or a banana peel – by throwing them into the sea.”

Peter: “Exactly.  While they’ve succeeded in maintaining a traditional way of life they’ve also let in a new way without first taking into account the impact it would have on the environment.  It was one thing to see drop-toilets that went straight into the sea and at first it was a weird concept for me but that waste is broken down quickly and the population is low enough that the sea doesn’t get polluted by it.  It was the sight of the garbage lined shore that I couldn’t get over.”

Shahla: “Me too.  I would cringe seeing a colourfully dressed Kuna woman empty a bucket of trash into the sea and floating away would be all sorts of pop cans, chip bags, candy wrappers and plastic containers.  It’s too bad that there isn’t some sort of program in place to help them deal with their waste issues.  It sucks that companies are quick to sell them non-biodegradable waste producing goods but don’t take into account their inability to dispose of the waste responsibly.”

Peter: “I’m not sure who should be taking responsibility for the waste disposal but I agree, it sucks that there isn’t something done about it.  Really I would think that it should be a joint effort of the Kuna leaders, the Panamanian government and the companies profiting off of the sales.  They should provide education about how to dispose of waste properly and install the infrastructure needed to allow people to do it.  I wasn’t sure what to think when we were confronted with the mandatory visitor’s fee and were told that the money is used to help preserve the Kuna culture.  How can we be sure that the money wasn’t being spent on the purchase of soft drinks, junk food or disposable diapers?”

Shahla: “I guess we can’t but I like to think that we supported the survival of a sliver of cultural diversity.  Hey, do you remember the crazy hills we faced when we got off the boat on the Panamanian mainland?”

Peter: “Are you joking?  Those were some of the worst hills we’ve ever done.  The road was asphalt but because of how steep it was only four wheel drive vehicles could handle it.  I’m not sure I’ve ever sweated more than in the few days it took us to make it through those hills.”

Shahla: “It was so humid there.  That was a tough one.  I can't believe it took us two and a half days to make forty kilometres!  It’s amazing how much the environment affects our daily routine.  I mean when we were in the hot, humid tropical areas we woke up earlier in order to ride in the cooler morning hours.  Now, in the cool, dry desert we often wait for the sun to warm our tent before getting out of bed.”

Peter: “Funny how we always had ice in our thermos then and now we always have hot water.  Come to think of it we cooked a lot less then too.  It was much more satisfying to eat a cold meal in the heat, not to mention the fact that neither of us had to sit in front of a hot stove to cook.  Now I look forward to sitting in front of the hot stove as the heat of the day fades and the chill of night sets in.”

Shahla: “Thanks for cooking.  Hot meals are awesome now.  I remember another difference about the tropical heat: how refreshing the rain could be.  We were always wet anyway whether it was rain or just sweat.  Costa Rica was over the top rainy.”

Peter: “I think it rained almost every day we were there.  The camp-spot criteria change a lot too eh?  Back then the ends of our riding days were spent looking for a sheltered area to set up our tent.  The ground was just too wet everywhere else.  I guess if our tent wasn't so old and didn't let water in through the floor we might've had a different experience.”

Shahla: “I'm not so sure 'cause a lot of the times the jungle was too thick for us to find a spot to pitch our tent.  It was a bit of a hindrance in that respect but the pristine forests there were amazing to ride through.  I often think back to all the cool animal encounters we had there.  I still can’t believe that we spotted a couple of three toed sloths hanging out in a tree!  They’re such bizarre animals.”

Peter: “And we didn’t have to worry about not having enough time to get the camera or binoculars out.”

Shahla: “Very funny Peter.  They did move super slowly though didn't they?”

Peter: “You mean the one metre they moved in the half hour we spent watching them?  I wonder if we would've seen them climb down the tree if we'd waited long enough.”

Shahla: “It was too hot to hang around and see but it sure adds to the fun of a day’s ride when we have an animal encounter.  There were so many monkeys there.  Do you remember the mother monkey that climbed a tree close to us with a baby clinging to its back?"

Peter: "I think it was a howler monkey.  I wonder what they howl about anyway.  Do you know if some of the different monkey species can understand other ones?"

Shahla: "I don't know about the monkeys but at times I felt like a different species of human while trying to communicate with the locals.  I actually didn't have too much trouble understanding the people in Costa Rica but overall I was surprised to find so many different accents and dialects in Latin America."

Peter: "You think you had it bad.  Try learning the language from scratch and going through all those changes.  It was a bit frustrating when I'd get confident using certain words or phrases only to find out that the locals of the next area had no idea what I was trying to say.  It felt like I was always learning to say the same thing with different words."

Shahla: "I think the vast differences in the Spanish being spoken had a lot to do with the influence that the indigenous languages have on the locals.  I was really surprised to hear so many people speaking Mayan dialects from Honduras all the way through Guatemala to southern Mexico."

Peter: "I remember thinking that the Mayan civilization was wiped out completely.  It was so cool to hear people still speaking the language of their ancestors.  It's hard to compare the sound of it to any other language we've come across so far."

Shahla: "How about someone from Turkey trying to speak Maori?"

Peter: "Ha, good one.  I'm not sure if we'll ever get to make that comparison for real though.  Mayan territory was a great spot for culture.  The art was amazing.  The wood carving was one of my favorites."

Shahla: "I was partial to the stone sculptures myself.  The details on the sculptures at the Copan ruins were unbelievable.  Even after centuries of erosion it was easy to make out intricate designs."

Peter: "It's hard to believe that a society so rich in the arts could have failed so terribly in sustaining a city like that."

Shahla: "I guess the beauty of the city itself could've contributed to its demise in a way.  People are naturally attracted to beautiful things and it was the population increase that caused them to use up the nutrients in the soil trying to feed the populace."

Peter: "Don't forget about their inability to deal with the amount of human faeces being produced.  That's what would've caused the rampant disease."

Shahla: "Well, I think we had a good look into what peril awaits a society that isn't living sustainably."

Shahla: "Enough about disease, how about the cure?  Do you think we'll be able to succeed where they failed?"

Peter: "I think that in order to get to the point of sustainability for the whole of society we need to first be able to achieve it ourselves.  Like the farms that we visited in Mexico where the people living on them were producing everything they needed to survive in the modern world.  I do have pangs of conscience about our consumption habits while we're on the road and would like to try to remove our support of the non-sustainable aspects of society."

Shahla: "I'm glad we feel the same way.  We'll have to produce our own food, natural gas and electricity, dispose of our own waste and consume water responsibly if we want to completely remove the strain we put on the environment."

Peter: “It was easy to minimize our impact on the environment in Latin America because there are so many smaller farms producing for smaller areas.  Almost everything we consumed was a locally grown product.  I also loved being able to refill our own containers in the markets instead of always getting another disposable plastic container.”

Shahla: “I wonder if we’ll be able to buy local produce and reuse our containers in the USA and Canada?”