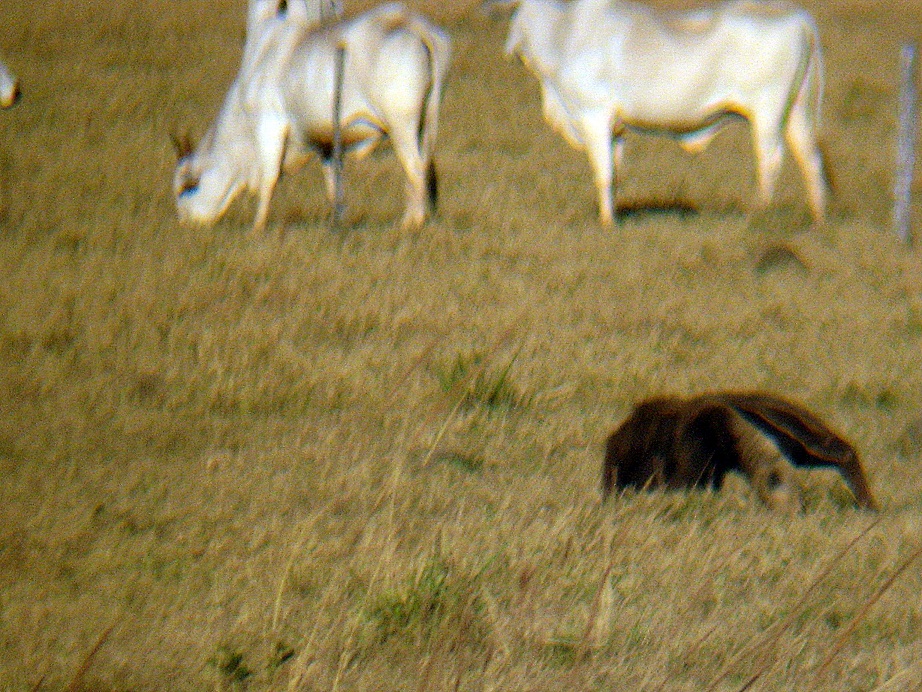 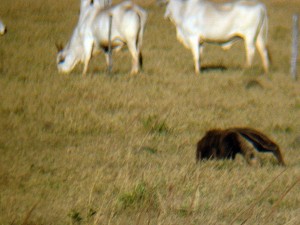 It was a beautiful morning in the state of Mato Grosso do Sul, Brazil and especially so for Anita the Giant Anteata.  She was just waking up on the day after her cub had headed off on its own.  Now she only had to fend for herself and would be able to take more time off during the day to do fun stuff.  But first, breakfast.

Emerging from the wooded area where she had spent the night, she came out onto a large flat grassy plain.  In front of her were hundreds of small ant hills and she could already smell the tasty little bugs.  The first hill she approached was quickly dismantled with her sharp front claws and her long sticky tongue shot out and collected the ants like flies on fly paper.  Delicious.  She moved on to a second hill and a third before the ants weren’t so easily caught.  She felt the unpleasant sting of soldier ants biting her tongue and face.  Anita was quick to move on and leave those ants in peace.  Besides, she’d had a nice little breakfast and now it was time for some fun.

She’d noticed a shady pond not far off and decided a refreshing dip would feel good as the heat was beginning to rise.  She smelled more ants on the way there and couldn’t resist snacking as she went.  Actually, Anita pretty much snacked all day long.  When she got to the pond, it was a scorching 50 degrees Celsius and the water was invitingly cool.  She swam around it easily several times and then sat enjoying the coolness and tranquility of the area.  She couldn’t enjoy the scenery with her bad eyesight but with her keen sense of smell she was taking in the soft, sweet aroma of the wild flowers growing around the pond.  There is another scent that reaches her and is enough to get her moving again.  The smell of more succulent ants but this time it came from high up in a tree.

Luckily Anita’s claws aren’t only good for exposing ants in a hill but allow her to climb freely to the nests of ants high up in trees.  She scrambles up to a nice fat branch and smells a nest nearby.  Perfect, now she can sit on the branch while she enjoys another snack.  The tree ants are just as tasty as the hill ants for Anita the Giant Anteata but there’s way more hill ants to be eaten on the ground than tree ants up in this tree.

She’s feeling refreshed now and the temperature has dropped somewhat so she concentrates on filling her tummy before returning to the woods for a good night’s sleep.  After descending from the tree branch she makes her way onto a field and smells the presence of a herd of cows.  The odour of the cows makes it more difficult for Anita to track down anthills and she finds herself walking quite a distance without detecting any.  She has however, a strange sensation of being watched.

On a nearby road, two cycle tourists are looking at her through binoculars.