A Year in the Life – New Zealand 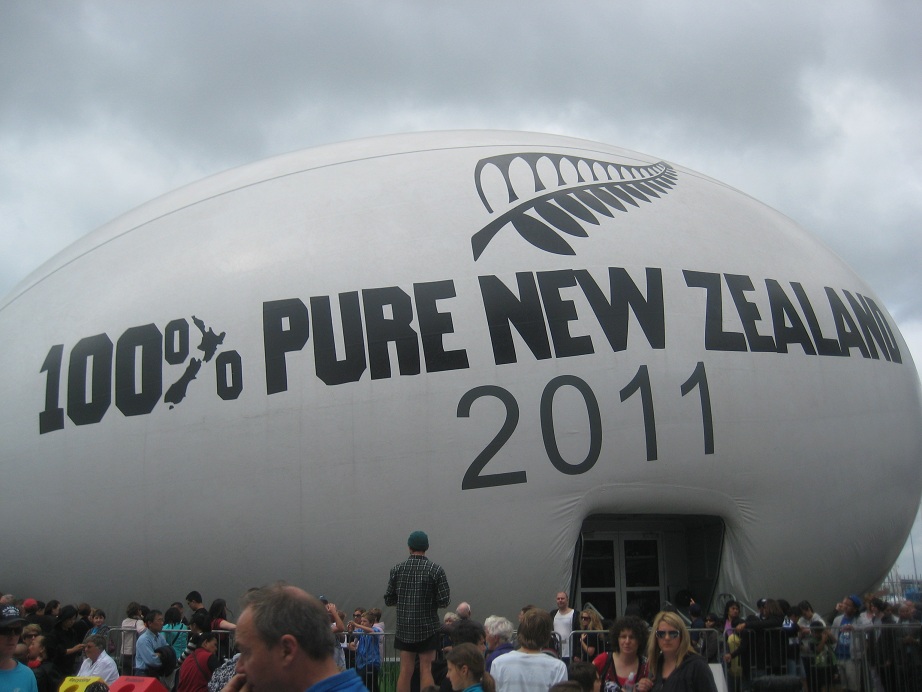 Alright, so we’ve written “a day in the life”, now we’ll try to summarize an entire year.

The first thing we’ll mention is our working period.  We set ourselves up in Auckland with a small room in a house in a nice quiet part of the city.  This time had all the makings of the ho-hum daily grind except for some special events.  Of these events there is only one that we really need to talk about and that is the Rugby World Cup.  Rugby is a game that Polynesians have a real passion for.  Whether they’re sitting in the stands, on a bar stool or running up the field, they’re putting their heart and soul into the game.  The

support for the tournament was so enormous that opening night facilities were filled beyond capacity.  It was basically mayhem with an ultra-positive vibe.  There were fans from all over the world but the ones that stood out the most besides the Kiwis (New Zealanders) were the Tongans.  They would wave their flags while dancing down the street in traditional colours chanting supportive team slogans and holding up traffic in all directions.  And that was just the opening night!  The team that stood out the most however would have to be the All Blacks (New Zealand).  They ended the tournament undefeated and crowned champions for the next four years.  Even though rugby isn’t a part of traditional Polynesian culture, the Polynesians have incorporated an ancient tradition into the game.  At the beginning of every match, they perform a Haka, a truly impressive display of coordination involving much foot stomping, chest pounding and ugly face making.  It is highly intimidating and meant to be a challenge to the opposing team.  The fact that the New Zealand Maoris have kept a strong hold on their culture made our earning period a learning period as well.  Incidentally a big part of the appeal that traveling has to us is exploring the diversity of the human race.  This helped us to ignore our travelers’ itch long enough to secure enough funds to keep us on the road a while longer.

Now the exploring New Zealand part.  We headed out of Auckland first to the north where we encountered some of the biggest trees we’ve ever seen, the kauri trees.  Much of the development made by the European settlers was fueled by the kauri timber and gum industries.  We paid a visit to one of these trees, the aptly named Father of the Forest (Te Matua Ngahere) that had begun to grow over two thousand years ago.  Standing in the vicinity of a living entity that has been around for the rise and fall of numerous civilizations can arouse a feeling of respect in even the most metropolitan city-slicker.  Thankfully before the timber industry could cut down the last of the kauri trees, concerned Kiwis took to protesting and even living in these and other native trees around the country in an effort to save this natural heritage.

Leaving the forest we cycled to the Waitangi treaty grounds where we found ourselves surrounded by history.  The story, the artifacts and the mood have been preserved and are a testament to the spirit of cultural co-existence.  Like most of the indigenous encounters with the western world, it was a bloody path to the peaceful compromise we see today.  The difference in New Zealand however, is that the indigenous people were a race of warriors that would not give up their land easily.  The strength of their forefathers has been passed down throughout the years and the Maoris of today continue to hold a deciding vote in the affairs of the country.

The islands that make up New Zealand sit at the convergence of tectonic plates.  This seems to have helped create the plethora of volcanoes strewn out across the landscape.  The lava flowing under the surface of New Zealand has served the inhabitants for many generations in many different ways.  We were able to experience some of the benefits first hand.  The hot, bubbly, sulphurous mineral pools have long been utilised for their curative properties and were even claimed to endow medicine men with their visionary powers.  We can say that after a hard days ride it feels like heaven but smells like hell.  It’s not possible to bathe in all the pools though, and the hottest ones were used for cooking.  They would simply place the uncooked food in a woven basket and lower it into the hot pool.  We didn’t get a chance to try this but were told that when the food was peeled or the skin taken off, it would not taste of sulphur or minerals.  Today they have been able to channel the steam into ovens to cook food naturally and without any fuel or electricity required.  These ovens don’t have a knob to turn but if they did you’d never get to turn it past “super low heat”, because if you turned it up to “high heat” you’d get an erupting volcano.  Every once in a while the earth turns up the heat and there are volcanic eruptions but thankfully we didn’t get caught in the middle of one.  We did see the evidence of flowing lava that came out of the top of Mount Ngauruhoe (Mount Doom in the “Lord of the Rings” films).  The lava looked like it had been frozen in time.  Forever to look like it just emerged out of the fiery chasm from whence it came.

New Zealand is made up of three main islands: the North Island, the South Island and Stewart Island (a small island off the southern end of the South Island consisting largely of national park).  On the North Island were the vast majority of the Maori people and all the things mentioned so far.  The South Island has been largely populated by European settlers and they’ve adopted a “southern man” persona due to the farming practices and overall ruggedness of the terrain.  This ruggedness is epitomized in the dramatic scenery of Fiordland National Park.  There are dense forests with many unique species and mountains jutting straight out of the ocean for many kilometres along the fjords.  It’s also the wettest region of New Zealand and only the heartiest of settlers would opt to stay anywhere near.  Like this wasn’t enough but just to the north of this national park lie massive glaciers carving out valleys with tons of ice.  It’s also in this area of the South Island where commercial bungee jumping was born and since then it has become the hub of extreme sports in New Zealand.  For us the choice was easy: a tandem bungee jump at the original site, Kawarau Bridge.  It has really turned into modern Kiwi culture and thus a must for the culturequest team.  Yaaaaaaaaaaaaaaaa!

New Zealand, the largest of the Polynesian islands, was for us an experience with island life in general.  The philosophy of not taking anything too seriously and not stressing out about things pervades every aspect of Kiwi life.  This environment is perfect for asking oneself where one’s priorities lie and ours are now in the journey ahead of us through the Americas…

One response to “A Year in the Life – New Zealand”