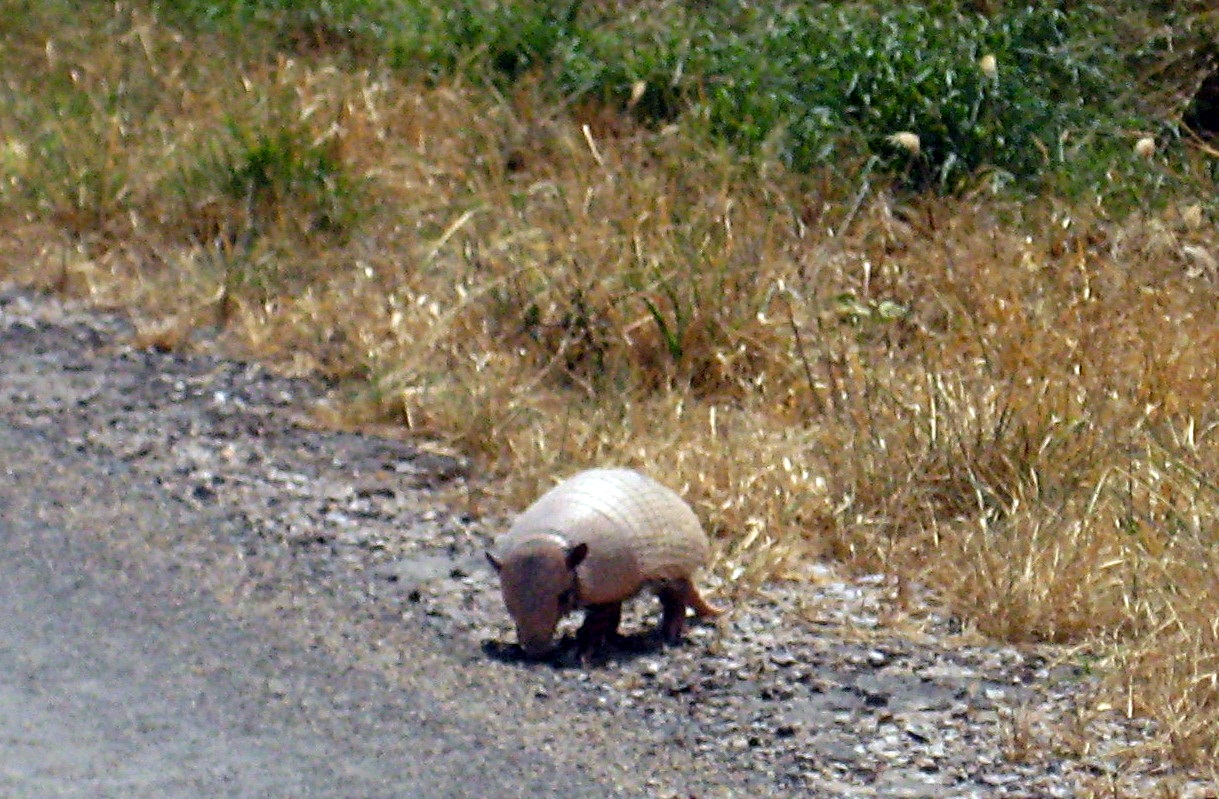 It’s early morning in central Uruguay and it seems to have the makings of a fine autumn day.  The sun is beginning to break the chill of the night and the early birds have already feasted upon their worms.  The countryside is reminiscent of a yin-yang with the eastern sunlit slopes contrasting the shadows of the west.  Shades of green and beige are intertwined in forest and field stretching as far as the eye can see.  Well, the human eye that is.  As far as our hero can see, would not be nearly as far due to the fact that his head lies only about five centimetres from the ground and his eyesight is so bad that he’s thinking about getting glasses.

“Geez, I hope the birds left me something.  My favourite breakfast is a few fat, juicy grubs or even worms.  It’s a good thing I love to dig because they’re usually hiding underground.  Okay Beebo, you can quit talking to yourself now and start digging!”

In case you haven’t guessed yet, Beebo is an Armadillo and also the hero of this tale.  Armadillos are solitary creatures and so they talk to themselves regularly.  I once heard of an armadillo that re-enacted Romeo and Juliet in its entirety while standing in front of a mirror.  But that’s another story…

“These grubs are great!  Oh no, there’s no more!  Time to move.  Just follow your nose Beebo, it never leads you astray.  I know, how about I head towards the old watering hole and then I can get a drink and a meal in one stop.  I do like the way you think Beebo.  Why thank you Beebo.”

The watering hole is a good place to find a meal and consequently it’s taken advantage of by more than just armadillos.  When Beebo arrived at the watering hole he found himself staring at three wild pigs all slightly larger than him.

“Darn!  I really don’t like those guys.  I guess I’ll swim to the other side and find my meal there.  Let’s see, it’s quite far so I’d better swallow a lot of air.  Gulp.”

Armadillos can hold their breath for several minutes when they have to.  Luckily, it’ll only take Beebo a couple to get across the watering hole and the held air in his stomach will help keep him afloat while he swims to the other side.

Just then Beebo shot half a meter straight into the air after one of the menacing wild pigs charged him at ramming speed.

“Man, this sucks here.  I’m taking off.  Those losers can have the watering hole.”

So Beebo set off across the plain in search of a more chilled out spot.  He didn’t realize it but he was walking right towards a little dirt road.  These roads seem to be everywhere and armadillos like Beebo have a hard time avoiding them.  While sniffing around for good food they lose themselves in the smells.  This sometimes leads to encounters of the human kind…

Beebo caught a look at two unusual beasts that appeared to be part human part machine heading right for him.  He’d seen humans before but they moved much slower and the machines he’d seen were fast, loud and smelly.  These were something entirely new to him.  Without pondering the possibilities of bicycle travel he headed for the first hole in the ground that he could find.  Unfortunately the hole was only big enough to house his head and half of his body leaving his whole rear end exposed to the anomalies.

“Cool, an armadillo!” cried one of them.