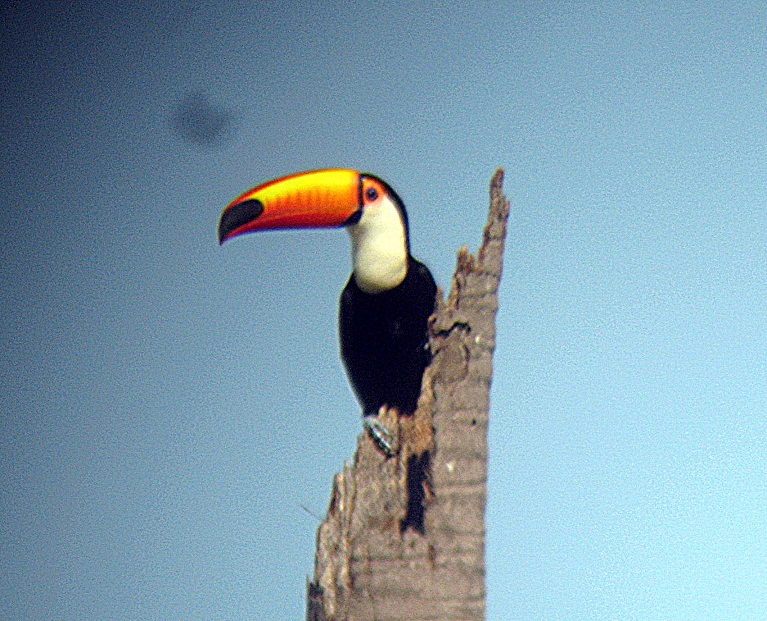 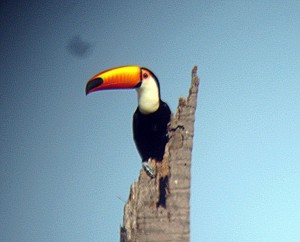 Taco the toucan took his tail off his head and opened his sleepy eyes to reveal a beautiful, blue, sunlit morning sky over the Bolivian Pantanal.  Next to him lay his wife, Salsa, still asleep and looking quite serene in the tree hollow that serves as their humble home.  Taco’s stomach was grumbling and he didn’t want to eat without Salsa so he decided to wake her up with a little noise.

“It’s a beautiful morning, you can take your tail off your head and we’ll get some breakfast,” whispered Taco.

“I saw some eggs deep down inside a nest nearby and it seems to be deserted.  None of the other birds can reach them with their short beaks,” Taco told her.

Toucans have irregularly large beaks that enable them to get at food that’s inaccessible to other birds.  This is an important part of their anatomy as they live with many other species of bird and therefore have a lot of competition for food.  Their beaks really came in handy for the breakfast of eggs that they seem to be enjoying at the moment.  Just as they were finishing up the last egg something caught Taco’s eye.

“Salsa, do you see the smoke over there?” inquired Taco.

“I heard from another couple that they were forced to move because humans had chopped down their forest and were burning the vegetation,” answered Salsa.

“Why would the humans destroy forests when there are so many creatures living in them?” wondered Taco.

“I also heard from them that they went back to see what became of their home.  What they found in place of a forest was an enormous field of soy plants.  Almost all of their friends had deserted the area and weren’t able to return for lack of food and habitat,” Salsa informed him.

“Oh no!  The smoke is getting closer and thicker and I can hear the sound of human destruction machines in the distance.  Look, other birds are beginning to leave their homes.  We’d better try and find a safe place to live as well,” decided Taco.

So began the destruction of Taco and Salsa’s forest home.  They said their goodbyes to the place they had called home since hatching from an egg and spread their short little wings to get away from the ever encroaching cloud of smoke.  Due to the fact that there wings are so small they can only manage short flights before needing a rest.  In this case it came in handy as they were able to inform other creatures along the way.

“A fire?!  Where did you guys say you came from?” asked Tony the Tuiuiu, an enormous water bird with his head sitting over a metre above the ground sporting a beak that put Taco’s to shame.

“You know where Carrie the caiman lives?  Well, just a little upstream from her place,” said Taco.

“I think I’ll be alright here for now but thanks for the warning,” remarked Tony.  “Say, you guys must be burning up from the long flight.  Can I get you some water?”

“No thanks, our beaks help to keep us cool.  We’d better keep moving if we’re going to find a new home by tonight.”

They waved goodbye to Tony as they flew on in search of a suitable tree hollow or even a hole excavated and deserted by a woodpecker.  In the distance they spotted an area with possibilities.  After only a few stops they arrived at the spot and almost immediately found a tree hollow that looked just right.  The only thing was a bit of debris that had accumulated and needed to be cleaned out.  They’d nearly finished cleaning out their new home when Salsa noticed two humans that seemed to be watching them.  She returned their gaze for a moment and continued working on her new home.  After a while she looked back and saw that the two humans were still watching them.

“How can humans be so interested in us and at the same time destroy our homes?” thought Salsa.

Slowly and silently the two humans began to glide away.